Emoji domains are a new technology. There are many interesting companies laying the groundwork for this amazing industry. Weapon Depot is one of the trailblazers of this developing industry, using the pistol emoji 🔫 in order to enhance the social shopping experience of the marketplace. More later about how Weapon Depot is changing the game of emoji domain marketing by using the http:// 🔫.ws domain. Before we go into what Weapon Depot is doing in the world of emoji URLs, let’s review a brief history of the emoji domain universe.

What is an Emoji Domain?

Some of the first emoji domains were registered by using the “.ws” extension. What makes the emoji URL work is something called a punycode. A punycode is a character or image that starts with an “xn--“. For example, the punycode for the pistol emoji is xn--bw8h.ws. Since there are thousands of emojis on Apple or Android, there are an infinite number of emoji combinations that can be used to form an emoji URL.

Emojis are based on special characters that need a punycode to render in a browser or website. Since emojis are considered an internationalized domain name (IDN), they are not support by ICANN or with a “.com” extension. However, in order for an emoji domain to work, the punycode converts the emoji character or image to ASCII and encodes the IDN for use.

In the early days of emoji registration, a user would typically go to a domain registrar. On such a site, the user would be presented with a search tool and was required to plug in a punycode or “xn” record. In order to find an emoji or set of emojis the user would search using the punycode for the underlying “xn” record and then go to a domain registrar to make a purchase or registration. During 2015 thousands of single character emojis were snatched up in what Matan Israeli of EmojiUrl says was the “gold rush” of domain purchasing. Israeli owns a large inventory of single character emoji domains available on his website; his company EmojiURL is pioneering innovative strategies for marketing emoji domains.

Fast forward to 2017 and enter superstar emoji expert Jon Roig. Jon Roig created the https://i❤️.ws website in a contest for Godaddy. Users looking to purchase an emoji domain can simply find the emoji they like using Roig’s search engine. The user can input any emoji character or string of characters to to see if the emoji domain is available for purchase.

At the time, no one knew how browsers like Chrome or search engines like Google would render emojis domain URLs. However, thanks to Roig sharing some code on GitHub, emoji domains will also render within a browser. For example, if a user types in this emoji domain https://i❤️.ws, the browser window will keep the ❤️. This way users don’t think they are being redirected to a different site and can feel comfortable with the site they are visiting. In the end the use of this simple code will enhance the user experience with emoji domains.

Do Emoji URLs Use “.com” Extension?

The short answer is no. A consortium call ICANN controls all top-level domains or TLDs. ICANN treats emoji URLs as a ccTLDs or country code Top Level Domains. ICANN restricts the use of emojis using the “.com” extension because there is a risk of confusion, as so many emojis are similar in appearance.

Emoji URLs are supported in many different types of ccTLDs like .to, .tk, .ml, .ga, .cf, and, .gq. In other words, if a user can’t find the domain they are looking for in “.ws”, they may search for other extensions. That being said, it appears that “.ws” is becoming the standard or pinnacle extension within the industry. According to Emoji Empires, Eric Thoni, “.ws” is quickly becoming the main platform for emoji domains as it “standardizes” and will help “organize the emoji domain industry” to ensure “consistency and legitimacy”. Startups like Emoji Empires at http:// 😀👑.ws are entering the emoji industry, capitalizing on new marketing techniques for companies to use as part of their emoji domain marketing strategy.

Can Emoji Domains Support an SSL?

Yes, emoji domains support SSLs or https. In addition to an SSL, users can also add emoji domains to their google webmaster tools as well as google analytics. This signifies a major shift in how users intend to track traffic and measure marketing efforts using emoji domains.

Companies Are Betting on Emoji URLs.

Many companies are using emojis with a 301 or a redirect. Companies like MGM and Budweiser have jumped in the emoji game.

Emoji domains can also be used in a stand-alone site with content, analytics, and all the bells and whistles of any major website.

How is Weapon Depot Using the Pistol Emoji to Enhance the User Experience?

Weapon Depot is using the Pistol Emoji to enhance the social commerce experience of the website for users. The pistol emoji character is available on all product pages, vendors store front pages, and brand experience pages. Customers that like a product on Weapon Depot can click on the Pistol Emoji Icon and copy a shortcode to share to Twitter or via email and Text message. Users receiving the short code URL will see the pistol emoji along with a short code. Once the receiving customer clicks on the pistol emoji they are redirected to the product page or store front page to engage the product or browse Weapon Depot.

Why Does the Pistol Emoji Look Like a Squirt Gun on Apple Keyboard and a Revolver on Android? 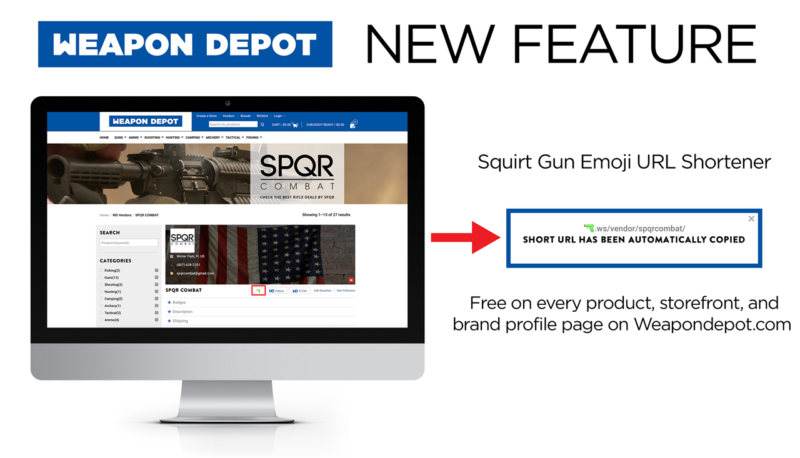 In either case, the underlying code is still the same and no matter what device people use, the pistol emoji is here to stay. But this is just the beginning. Big things are coming for the pistol emoji. Weapon Depot plans to debut a larger connection between the user and the emoji, opening up the emoji for access by everyone both on and off the Weapon Depot universe. Stay tuned…

Emoji usage is on the rise. In 2015, AdWeek found that 92 percent of online consumers use emojis. The numbers for social media usage are even more outstanding. According to another article on AdWeek, emoji usage on Facebook tops 60 million per day, and over 5 billion in Facebook Messenger.

While emoji usage seems here to stay, is the same true for emoji domains?

One factor that may tip the balance in favor on emoji domains is that users can optimize an emoji domain for search engines. This means website owners can rank for emoji-based searches on google. According to an article in Search Engine Journal, SEO expert and CEO of Rusty Brick, Barry Schwartz found that Google provides search results or images that correspond to each emoji used in the search query.  In addition, Matt Southern found that Google is “indexing and placing more value into emojis”.

Social networks are catching onto the emoji domain explosion. Twitter renders emoji URLs very well. Users can click on any emoji domain with a fluid redirect to the main website. Facebook, however, does not support emoji URLs. Facebook seems to be the number 1 place for people to use emojis. Between Facebook and Messenger, billions of emojis are shared and delivered each day. Facebook does not support any type of emoji domain within a post. Users can input the full http address like http:// 🔫 .ws and social network ignores any linking to the site.

NFT Marketplaces: The Future of Guns and Ammo

How to Buy and Sell Guns Online [eBook]

Everything You Need to Know to Buy a Gun Online

Basic Requirements for Purchasing a Firearm